START DANCING WITH US

Hundreds of people have taken one of our 6-weeks Beginners course. You'll be dancing in no time!

REGISTER FOR YOUR COURSE

GIVE US A TRY FOR 1 WEEK

For only $20, get access to all of our classes for one week. We're confident that you'll enjoy your time at TS

DANCE AS MUCH AS YOU WANT!

We'd love for you to dance Salsa, Bachata, Kizomba, Zouk, Mambo, Cha Cha as much as you want! Memberships are the best value for money. Take all the latin dance classes that you love!
We also offer Class Passes! Have a look at our pricing options:

PROCEED TO OUR MEMBERSHIPS

At Tropical Soul we specialise in Street Latin Dancing. From the rhythms and influences of Cuba, Dominican Republic, Latin America, New York, Puerto Rico and many more places!

We focus on a variety of dance styles: SALSA, BACHATA, MAMBO, KIZOMBA, and ZOUK. In addition to this, we also offer specialty classes such as Cha Cha Cha, Styling, Dance Technique, and many more! Catch a glimpse of these amazing dance styles here.

SALSA is one of the most popular Latin dance rhythms around the world, with origins from Cuba, as the meeting point of Spanish (European) and African cultures.

It is danced throughout the world and has become a global phenomenon. Salsa is normally a partner dance, and is usually improvised on the dance floor, but it can also be performed with a set choreography for entertainment purposes.

Today’s Salsa dancing is a rich blend of Latin-American and Western influences, and there are many styles of Salsa dancing out there (Cuban, Colombian, Linear On1, Linear On2 or Mambo). Be warned: it is highly addictive!

BACHATA is a partner dance that originated in the Dominican Republic, and is now danced around the world.

The music is romantic and sensual (traditional Bachata is most often bittersweet music) , and has developed along with the dance, from traditional Dominican Bachata to urban and modern Bachata.

Not only Tropical Soul’s team of instructors are well versed in all styles of Bachata, but they are also none other than the pioneers of Bachata Moderna, a modern and exciting style that will make you a favourite on the dance floor!

While KIZOMBA is starting to take the world by storm, it is still an emerging dance style in many countries, so don’t be suprised if you haven’t heard of it yet! Kizomba comes from Africa: the Luso-African countries, mainly Angola and Cape Verde (where it is called Passada = meaning steps or a pattern of sequential steps). The word ‘Kizomba’ is derived as a linguistic expression from the local Angolan slang Kimbundo meaning ‘party’.

Kizomba is a beautiful partner dance often described as African tango, due to its mix of Afro body movement and Tango-esque patterns, and danced to Zouk music. It’s both beautiful and deceivingly technical, and is a joy to learn and dance. Tropical Soul has long been one of the strong ambassadors of Kizomba in Australia, offering continuous Kizomba classes since 2012!

MAMBO was made popular in New York in the 70’s and 80’s by the famous Eddie Torres Sr. Mambo’s break steps are on the counts 2 and 6, giving the dancer a smooth feeling, as if gliding on the dance floor. We highly recommend to start learning Mambo, after becoming comfortable with Salsa dancing!

BRAZILIAN ZOUK is a partnered style of Latin dance that can be danced to a variety of musical genres such as Pop, RnB, Hip Hop, and Classical. Accordingly, it has risen in popularity and spread worldwide from Brazil to the US, Canada, Europe, Southeast Asia, New Zealand, and Australia.

Brazilian Zouk is danced to a count of 8 with downbeats on 1, 3, 5, and 7 (of any 4/4 time music) and as double and triple rhythms can be used, it is a dance that caters for creativity and improvisation.

Brazilian Zouk began in Brazil in the early 1990’s. It originated from a Brazilian dance called Lambada, a popular dance in Brazil during the 80’s which slowly lost popularity due to its fast style and challenging body movements, DJ’s playing less Lambada music, and the fact that it became forbidden due to the sensual nature of the dance. It was in the mid 90’s that Brazilians discovered Zouk, a rhythm from the French Caribbean, and started to adapt Lambada to Zouk thus, creating Brazilian Zouk. As the style evolved and developed its own distinct flavour, other sub-styles were created such as SoulZouk, NeoZouk, and Lamba Zouk in addition to Traditional Zouk (Rio-style Zouk).

CHA CHA CHA (also called Cha Cha), is a dance of Cuban origin. It is danced to the music of the same name introduced by Cuban composer and violinist Enrique Jorrin in the early 1950s. The name of the dance is an onomatopoeia derived from the shuffling sound of the dancers’ feet when they dance two consecutive quick steps that characterize the dance.

Cha Cha Cha is often described as a fun, cheeky and lively dance, which allows for a lot of body movement (as it is slower than Salsa), and a lot of creativity and playfulness with the rhythm. It can be danced with a partner, as well as without (also called Shines / footwork combos). Cha Cha Shines classes are very popular as they enable the dancers to work on their footwork, musicality and body movement skills. We love that Tropical Soul is considered by many to be the home of Cha Cha in Sydney, and Australia!

STYLING is a big part of Latin Dancing that is about beautifying your steps and displaying your unique personality through movement.

By understanding different types of body movement, and developing a strong mind-body connection, the goal is to create beautiful shapes and connected movements to stylise your dancing according to your strengths & personality.

There is no specific dress code for our classes, but we recommend the following: 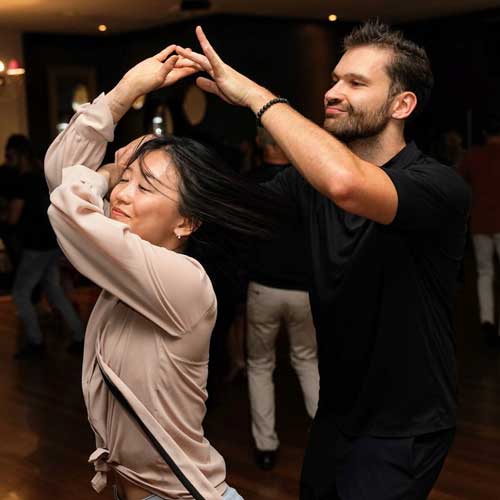 THE BEST TIME TO JOIN US

We understand that it might be intimidating to join a dance class if you haven’t danced before. That is why we are offering
FREE ABSOLUTE BEGINNERS CLASSES for SALSA and BACHATA.

Join us for a fun 30 minutes class, and learn the basic steps from one of our talented Latin dance instructors.
Feel free to come back for the Absolute Beginners classes as many times as you’d like!

Registration is a must! We offer SALSA, CHA CHA, BACHATA, MAMBO and KIZOMBA! This is an amazing offer – For new students only!
Attend unlimited dance classes at no cost for 1 week!